Morocco is a country that enchants you. From the colorful, lively markets filled with the rich scents of spices to the stunning Atlas Mountains...

Morocco is a gateway to Africa and a country of dizzying diversity. Here you'll find epic mountain ranges, ancient cities, sweeping deserts – and warm hospitality. Morocco has a hundred faces, scents and sounds, all ready to welcome the traveller looking for a spicy adventure holiday. It is incredibly gorgeous, and packed with stupidly photogenic sights, but it can also a really challenging place to visit, one you need to have done your research on. Solo female traveler...with the right precautions you will be just fine on your own if you so desire.

Vegetarian or vegan traveler...you may get a little sick of vegetables tagine and couscous but you will make out just fine, and sometimes splendidly.

BEST TIME OF YEAR TO VISIT

There is no bad time to visit Morocco, but generally, the best time to visit is during April and May or September to November, the country's shoulder seasons. During these months, the climate is neither too hot nor too cold, and there are fewer tourists to contend with than there would be during the peak summer or winter vacation periods. However, those hoping to trek the Atlas Mountains or surf the waves on the Atlantic coast may find that other times of the year better suit their needs.

Arabic, Berber, French is second language for many

Morning - At 8am you will start your trip with some Casablanca highlights. Named "White House" by a group of Spanish and Portuguese sailors who marveled at the white houses facing the ocean in the Anfa district, today Casablanca is a bustling city of boulevards and modern infrastructure. Walk around the Habous district, where the small squares and narrow arcade streets provide a fine example of contemporary city planning mixed with the maze-like streets of the traditional medina. Continue towards United Nations Place and the majestic Mohammed V Square. Then, go to the lively Central Market and the surrounding Royal Palace. Visit the Notre Dame de Lourdes cathedral and the famous Hassan II Mosque to experience 2 religious epicenters of the city. The latter is the largest mosque in Africa. This stately mosque, a fine example of pure Moroccan architecture, is the only one in the city that non-Muslims may visit. 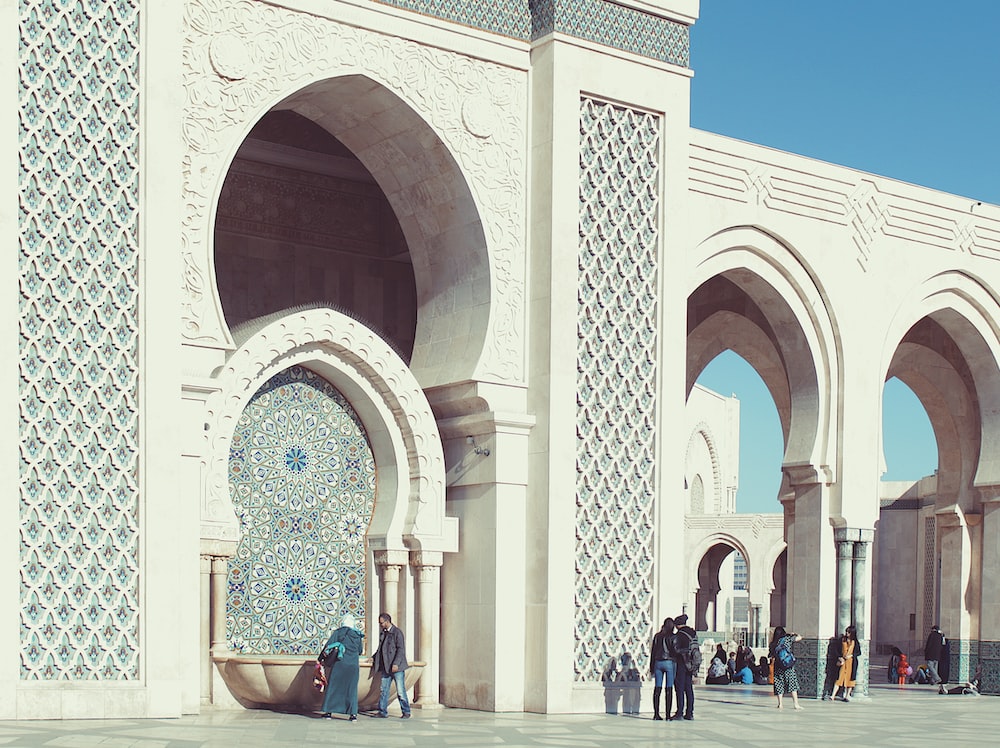 Time to travel to Rabat, the capital of Morocco.

You must be hungry. Find lunch within the walls of the old medina at Dar Zaki. Enjoy a home-cooked meal, both meat and vegan options available. 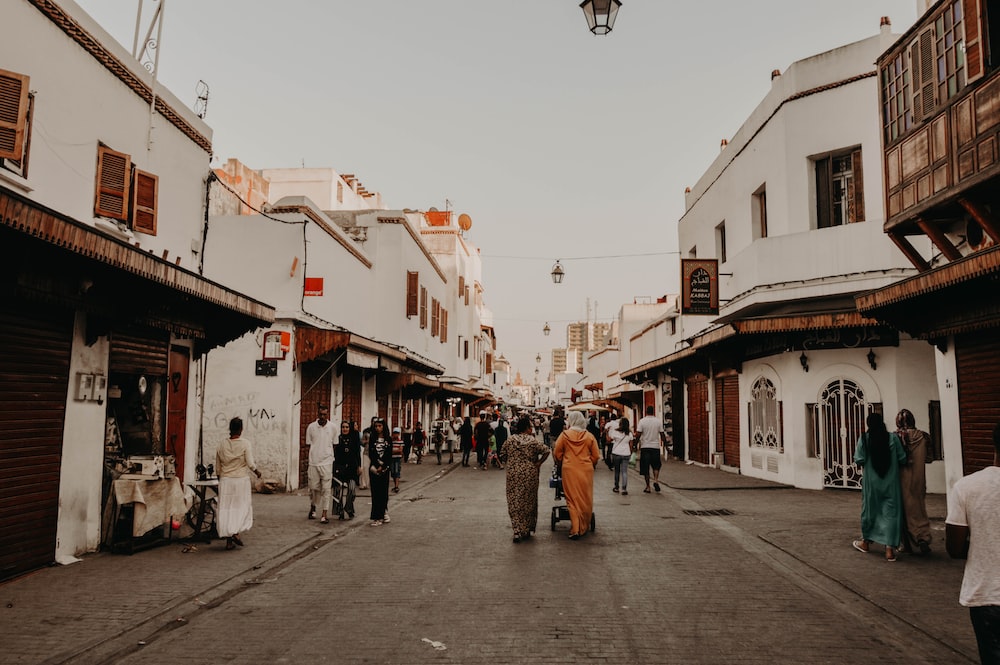 Afternoon - Discover the main sights in Rabat on a half-day tour. Visit the Chellah, a necropolis complex built by the ancient Romans in the former province of Mauretania Tingitana. On the outskirts of Rabat, this site is the most ancient human settlement on the mouth of the Bou Regreg River. Continue your tour to see Hassan Tower, the minaret of an incomplete mosque, and the Mausoleum of Mohammed V and his two sons, late King Hassan II and Prince Abdallah. The building is considered a masterpiece of modern Alaouite dynasty architecture. Next, visit the 12th-century Kasbah of the Udayas named Al Mahdia in reference to the original leader Al Mahdi Ben Tumurt. Originally this Kasbah was a Ribat (a military defense) but in 2012, it was declared a UNESCO World Heritage Site. Then, explore the ancient ramparts and shops in the old medina.

Check into your riad in the medina for the over night where dinner will be arranged for you.

Morning - After a charming breakfast in your riad, bright and early at 8 am you will begin the drive to the city of Chefchaouen. Along the way you will pass through many small towns and stop for breaks. It really is a lovely drive up through the Rif mountains.

You will arrive in Chefchaouen, the beautiful blue door and white walled Medina, which was originally a Berber post, just in time for lunch. Bab Ssour located in the medina has both meat and vegan options. Head up to the terrace upstairs to enjoy. 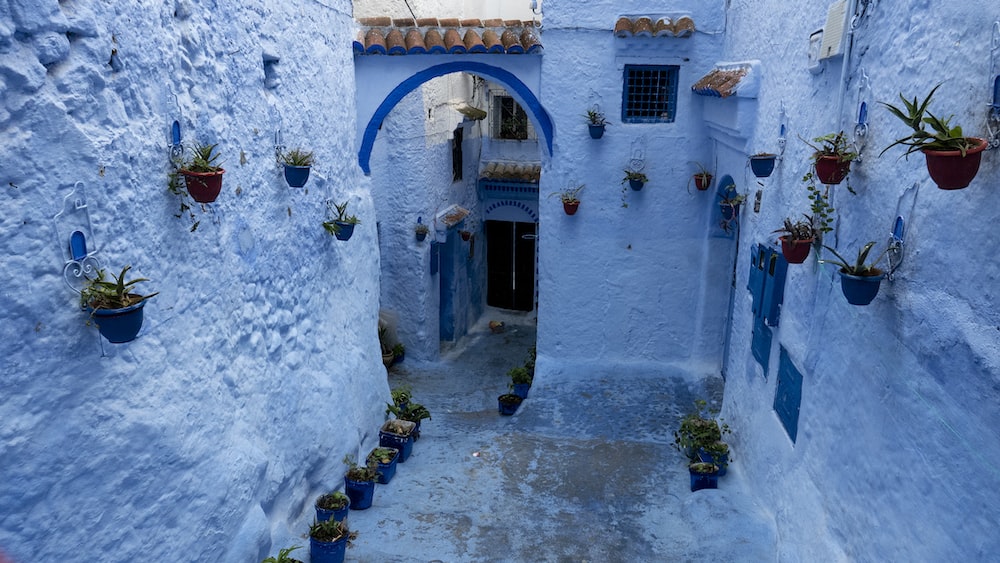 Afternoon - Explore the main square, the heart of Chefchaouen, with its 18th-century kasbah, central mosque, and cafes with authentic Moroccan style menus. Of course you're going to want to take pictures galore! Make sure you've picked out that picture perfect outfit. Stroll the market to discover a mix of traditional Moroccan and tourists souvenirs or visit the Jewish Quarter behind the jewelry souk to discover a unique part of the city. 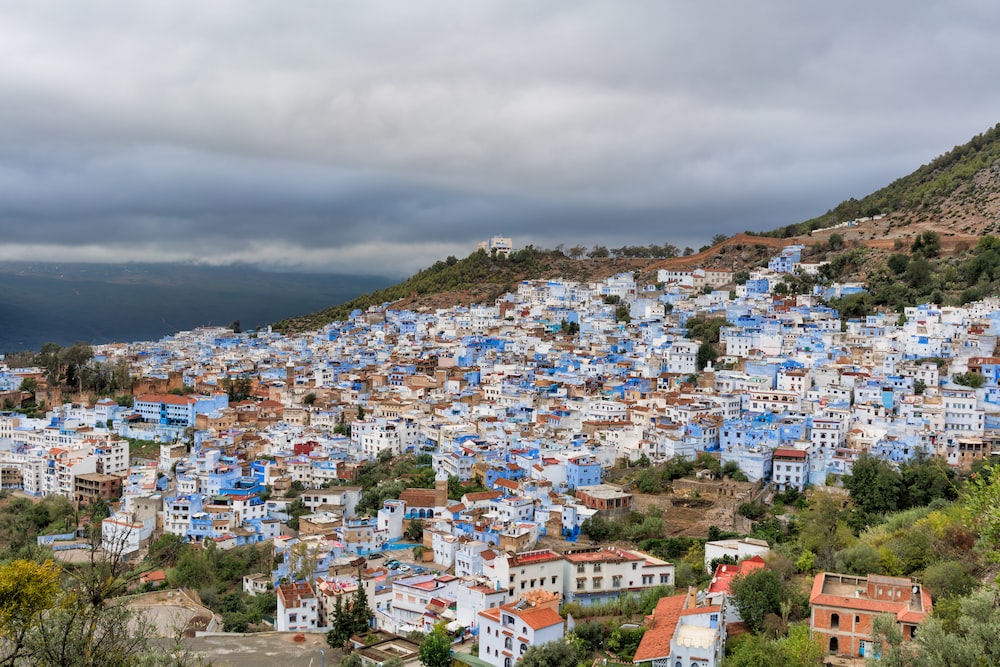 An easy hike (about 30 minutes) will take you up to the Spanish mosque which provides a beautiful vista overlooking the town nestled in the mountains from which to watch the sunset. Grab a freshly-squeezed orange juice, or my personal favourite - an avocado juice, on your way up.

Spend the night is your gorgeous riad where dinner will be arranged for you.

Morning - if sunrises are your thing, head up to the rooftop of your riad early to watch the sun rise as you sip your Moroccan tea. After breakfast, about 9 am you will begin the drive to Fes. 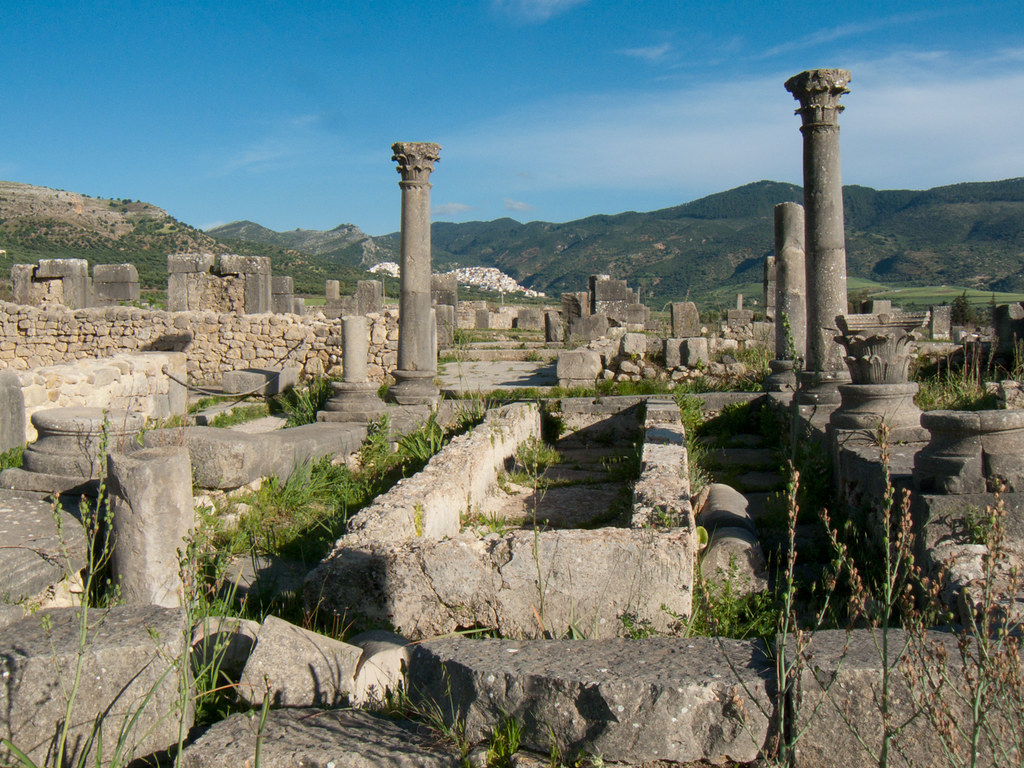 On the way you will stop to visit the famous well-preserved Roman city, World Heritage site of Volubilis. Explore the remains of the 2000 year old complex with a local guide. Learn about the history and culture of the Romans by exploring the ruins of the Arch of Caracalla, Basilica, and the Capitoline Temple. Continue to Moulay Idriss to discover one of Morocco's holiest cities. Take a tour of the narrow streets of the compact town where Moulay Idriss I introduced the religion of Islam in 789 AD. Admire the panoramic views, elongated squares, and the green-tiled pyramids of the Zaouia as you stroll through a labyrinth of clean alleyways.

From here you head to the city of Meknes, founded in the 11th century by the Almoravids as a military settlement.

Priorities. First of which is lunch at a local restaurant. 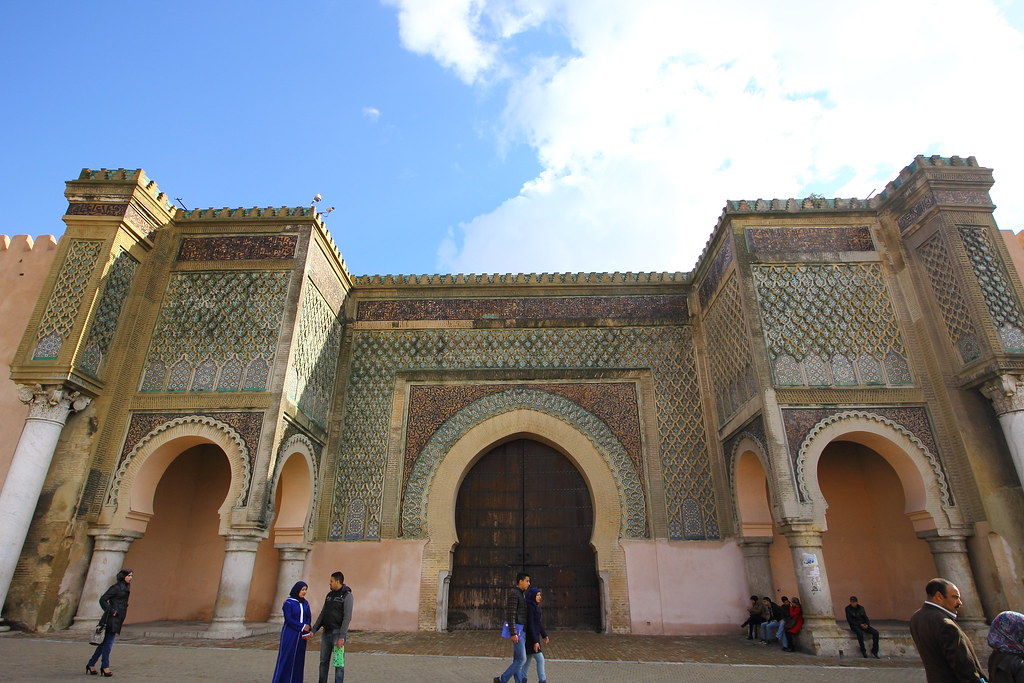 After you've eaten, start your tour of Meknes. Go into the Medina and see some of the monumental city gates and ornamental decorations of the Spanish-Moorish architecture dating back to the 17th-century. Admire the Royal Palace, Berdaïne Bab, and Bab Khemis. Then head over to the Africa Bab Mansour and El Heri es-Souan, huge granaries and stables built by Moulay Ismail's soldiers. Make a stop in the Moulay Ismail Mausoleum, which for a long time was the only mosque which non-Muslims were allowed to visit in Morocco. Visit the Place-El-Hedim monument before continuing on to Fez 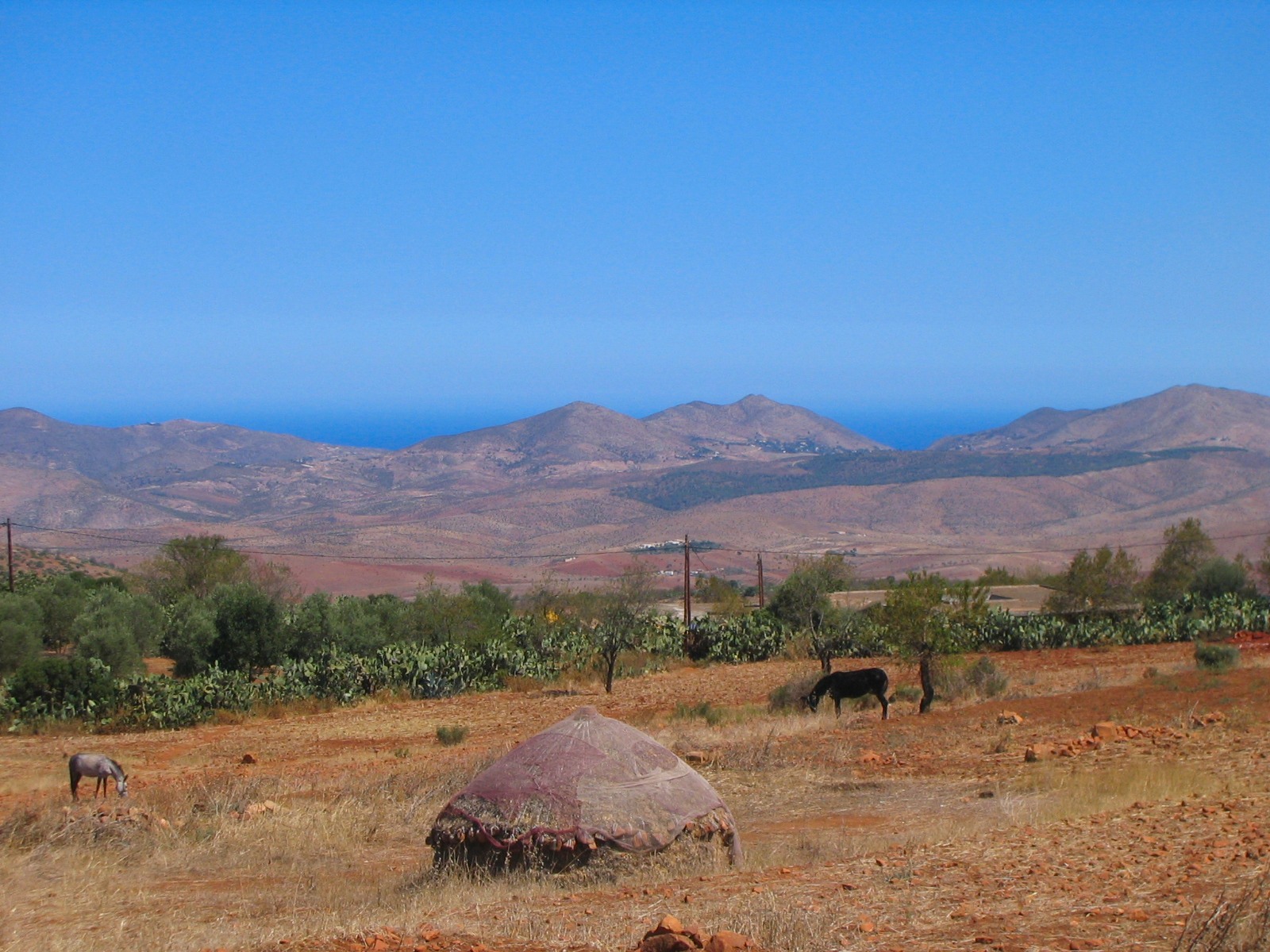 Check into your riad in Fez.

Perhaps you have the energy for a night out? For a unique and elegant evening, head to the luxurious Hotel Sahrai at the entrance of Fez el Bali. After a sumptuous meal in the hotel restaurant Arcades, wander up to The Rooftop bar for drinks and music accompanied by stunning views over the medina.

Days 4 through 14 - contact me for further details at shariblock@findyourhappytravels.com